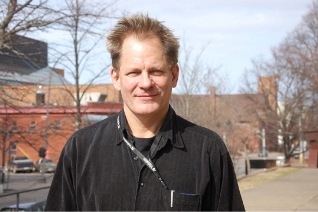 Goodwin is the director of training for 1in6, an organization that acts as a resource for male victims of sexual violence, and provides assistance for victims’ families and friends.

Last month, 1in6 held two training days on the subject for people in organizations that offer services to sexual abuse victims in Los Angeles. The training sessions, held at the offices of The California Endowment in downtown L.A., were made possible by a $20,000 grant 1in6 received from the Jewish Community Foundation of Los Angeles.

Goodwin led the sessions on both days. He has more than 20 years as a trainer in dealing with sexual abuse cases, a master’s degree in social work, and he operates a psychotherapy clinic for male victims of sexual abuse in Ottawa, Canada.

The sessions consisted of explaining to participants the type of research that is needed on male victims of sexual violence, how to break down the “invisible code” for boys and men, discussing cultural delusions, listing the types of victims and the possible reactions they face when disclosing their abuse, and going through ways to approach victims/survivors.

“If even one person can bring their organization into a more inclusive path by considering men in this issue, that in itself is a success,” Goodwin said, during a break on the first training day.

The 1in6 organization’s name comes from what it considers a conservative estimate of how many American males have experienced abusive sexual experiences before age 18. The figure, the organization says on its website, “is probably a low estimate, since it doesn’t include noncontact experiences, which can also have lasting negative effects.”

Indeed, research conducted by the U.S. Bureau of Justice Statistics’ National Crime Victimization Survey and other organizations over the last decade has determined that men accounted for between 5 and 14 percent of rape and sexual violence victims. However, in 2013, the victimization survey reported that its questioning of people in 40,000 households found that 38 percent of rape and sexual violence incidents were against men. Researchers could not provide a definitive reason for the substantial increase in reported cases, but their assumption was that greater news coverage and societal awareness of rape and sexual assault against males had prompted more men to speak about experiences they would not have shared in the past.

The 1in6 sessions’ more than 80 attendees included University of California Title IX investigators, representatives of organizations that assist sexual abuse victims — such as My Friend’s Place, which works with homeless youth — staff from rape crisis centers and social workers. Goodwin said 1in6 plans to host such sessions annually.

According to Elana Wien, director of the Jewish Community Foundation’s Center for Designed Philanthropy, the grant, along with the seven others awarded to sexual abuse-related organizations, does not stray from the foundation’s Jewish roots.

“The work of the foundation is steeped in the Jewish precept of tikkun olam — repairing the world,” Wien said. “We and our donors feel a profound sense of obligation to support the betterment of all communities — locally, nationally, in Israel and throughout the world.”

She added, “We selected 1in6 and all its cohort programs because we believed a difference can be made.”