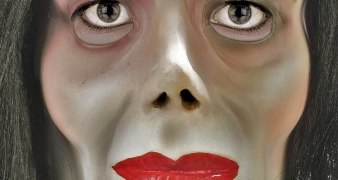 According to the complaint, filed with the Los Angeles County District Court, Jackson repeatedly molested and sexually assaulted the girl at multiple venues. That includes the Neverland Ranch, the set of ‘Moonwalker,’ Jackson’s Encino mansion, and even the back of Jackson’s limousine.

Accusations against Jackson have always involved underage boys, until now.

We don’t know the name of the victim, except that she was an underage female at the time of the purported violations. That is notable because previous accusers have all been males. Earlier, a leaked evidence dossier from a 2003 raid of Neverland Ranch revealed piles of pornography, including books containing naked imagery of young boys.

This time, there may be a smoking gun. Or, several of them. The woman’s attorney, Vince Finaldi, says that after molesting his client, Michael Jackson personally arranged for massive payments to silence his victim. Those payments totaled $900,000, and include a $600,000 check apparently written by Jackson himself.

Finaldi says he has proof that these checks were written and signed by Jackson. And he’s preparing to present them to the court as authentic documents. More importantly, Finaldi says these payments were not routed through some shadowy third party, but came directly from the pop singer’s account.

It’s a smoking gun that Finaldi says proves that Michael Jackson was a vicious, repeated molester. And one who used money and power to get away with it.

The lawsuit is not being directed against the Jackson family. But two entertainment companies formed by Michael Jackson are the target, as they had the ability to prevent the abuse. Those companies are merely being listed at ‘Doe 1’ and ‘Doe 2,’ at least for now.

That ultimately sounds like a lawsuit against the Jackson Estate, which may effectively be the same thing.

The lawsuit couldn’t come at a worse time. Earlier this year, Radar Online published a leaked dossier of police evidence, collected by authorities from raid of Neverland Ranch in 2003. The raid unearthed ‘stockpile of child pornography,’ according to the report, though Michael Jackson defenders noted that most of it wasn’t illegal.

Possibly, though the putrid ‘stockpile’ wasn’t exactly Disney-friendly, shall we say. The detailed evidence contained S&M, strange collages of children’s faces pasted on adult bodies, and other seriously deranged material alongside graphic DVDs and computer files.

Collections containing naked images of children, particularly boys, were also found in the raid. It’s unclear why the Santa Barbara Sheriff’s Office didn’t pursue criminal charges against the singer, or publish the dossier.

“The documents exposed Jackson as a manipulative, drug-and-sex-crazed predator who used blood, gore, sexually explicit images of animal sacrifice and perverse adult sex acts to bend children to his will,” one Radar source explained. “[Jackson] also had disgusting and downright shocking images of child torture, adult and child nudity, female bondage, and sadomasochism.”

Radar Online was since sued by the Jackson family for accusations that the pop star molested his own nephews. The dossier has since been pulled down. That raises some questions about authenticity of the leak, though the Santa Barbara County Sheriff’s Office did not deny that genuineness of the document.

After repeated questioning, the Office refused to go beyond a limited statement:

“Some of the documents appear to be copies of reports that were authored by Sheriff’s Office personnel as well as evidentiary photographs taken by Sheriff’ Office personnel interspersed with content that appears to be obtained off the internet or through unknown sources. “

Jackson family on the counter-attack.

Howard Weitzman, attorney for the Jackson Estate, says the claims are baseless. And worse, just vulturous activity by money-hungry lawyers. “This is yet another attempt to hit the lottery by suing the Estate of Michael Jackson more than seven years after Michael’s death and close to 30 years after these incidents supposedly occurred,” Weitzman declared in a statement.

“We believe this claim was created from whole cloth and is without any merit.”

Weitzman also noted that Finaldi’s law firm, Manly, Stewart & Finaldi, has filed similar cases like these in the past. That includes a high-profile allegation from choreographer Wade Robson, who said Jackson repeatedly molested him as a boy. “It’s also no coincidence that this woman is represented by the same attorneys involved in two other frivolous claims against the estate,” Weitzman added.